The Parents Perspective- Talking to Children About Preventing Sexual Abuse

Bashita sounded polite and gentle over the phone. For such a strong woman, she was also jovial and quick to laugh. Bashita raises her three sons largely by herself while her husband often travels for work and isn’t able to stay with them. While he plays the traditional role of the patriarch- supporting the family and inculcating values of honour and respect, Bashita is responsible for the everyday care and the upbringing of the children.

The most inspiring thing about Bashita though is her openness. When asked about her children, she brims with pride. As a mother of three young gentlemen, she has seen and heard it all. Her youngest boy Niljoy, now in the 10th standard is deaf and is the shyest of the three.

Even for a mother like Bashita, talking about sex, puberty and reproduction is still an unspoken taboo. How did her sons learn about puberty and sex? The same way that most children learn- through television, mobile phones and in conversations with their friends.

This can be problematic as the portrayal of sex on television is far from accurate, often dramatized and sometimes violent. It is not intended for educational purposes.

Similarly, children in peer groups do not have full information and the lack of open and clear discussions with an adult can lead to many misunderstandings. She is also concerned about her youngest son Niljoy. As a shy child with few friends, he doesn’t have the same kind of exposure that her other two sons received in their teenage years. He is embarrassed to talk about his body and turns away when these kinds of conversations arise.

In the war against child sexual abuse, information is our greatest weapon, but a heavy one that we must choose to weild. Talking to our children about their bodies is critical. Deaf children especially can be 2-3 times more prone to abuse and have difficulties communicating with adults about what has happened.

We can change that.

Helping young children identify parts of the body without shame or guilt is the first step. Teaching our children the NO, GO, TELL rules and about safe and unsafe touch will go a long way in helping the child express themselves and escape from potentially threatening situations.

Bashita agrees that as a mother, she had never thought about talking to her boys about her own menstrual cycle. Living in the same home, they were aware that on some days in a month she did not light the fire in the pooja room. On these days she is sometimes more tired and takes a break from the cooking as well. She thinks that her elder son may have learnt about menstruation at school in the 8th standard as it was a part of the syllabus in their biology classes and talked to her younger sons about it. But she is unsure how much detail the teacher went into and the textbook mostly covered a diagram identifying the internal parts of the body.

No one in her family ever spoke to Bashita and so it never occurred to her that a conversation with her son was required. They would learn the same way she did, slowly and over time through friends and general exposure.

“If I am equipped with some training, I will feel more confident to have such discussions with my children. I should be able to answer their questions and help them find more information if they need it.” Bashita says.

VAANI’s #VAANINOGOTELL campaign aims to break the silence around child sexual abuse and empower families with the information they need to educate their children. Get involved by following us on social media and helping to spread the message.

*Names have been changed to protect the privacy of the individuals and their families. 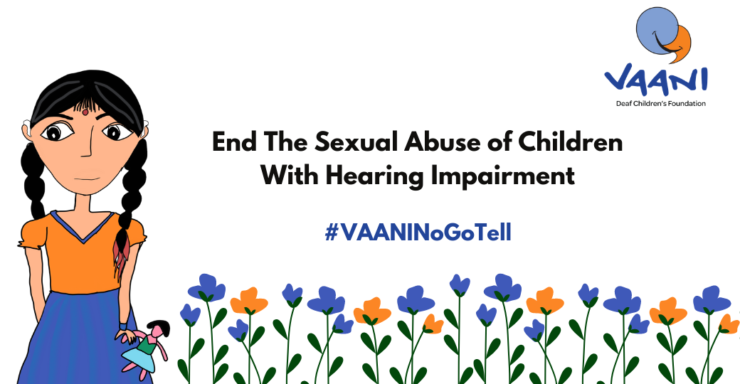 Child sexual abuse is sadly rampant in India.  There are daily reports in the press of children, sometimes as young as six months, being raped or gang-raped and then being killed. For several years, the judicial processes were more aimed at adult victims, they were cumbersome and lengthy, and families

Folks, these are testing times for each and every one of us. Imagine a fellow Indian who is unable to express one's fears to even their loved ones. It would be scary, right? We at VAANI have been helping deaf children and their parents to communicate and understand each other